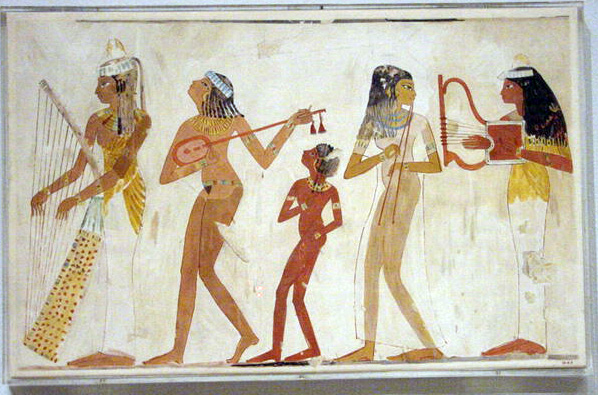 Musicians often performed at religious festivals. They also played at private parties. Probably workers in factories and fields often sang and clapped as they worked, to help keep up a rhythm.

Download File
Year 4, this is your chance to create some music with a flavour of ancient times – think of sphinxes, of pyramids, of curses on tombs....!!

You will need to use instruments we know were used in ancient times e.g. the (tabla/djembe) drum, cymbal, tambourine, claves (two sticks!), bells, plus stringed instruments, as it is important to have a melody line. (You could also use our xylophones, glockenspiels and boom-whackers to vary the timbre of your piece. The keyboards are also available to you - can you find a suitable stringed 'voice' or maybe some ancient Egyptian-sounding percussion?)

Find the place on your keyboard where there is a wide gap between the black keys.  Use these two black notes, plus the white notes above and below. Remember that Egyptian music uses melody (the tune) and rhythm, but not harmony – makes it easier really! The most common rhythm patterns are;

(Dum is the sound of your hand in the middle of the drumskin, the tak is your finger tips on the edge/rim - a higher pitched sound)

You can use words too! Choose names linked to Egypt, the Nile, temples, names of gods such as Horus and Pharaohs such as Tutankhamun. There are some examples of song lyrics at the bottom of this page - scroll down and have a look.

Structure: Your piece should have two sections, which are different.  Call the first section ‘A’ and the second section ‘B’.  Perform your piece by playing ‘A’ then B’ the ‘A’ again. (ABA). This is a standard musical form used by all musicians, even Mozart, and is called RONDO FORM.

Because there wasn't any way of recording music or writing down notes in ancient Egypt, we don't know what Egyptian music sounded like. From pictures, we do know what kind of instruments the Egyptians had. As you can see in this picture, there were stringed instruments like guitars and harps. There were also wind instrumentslike recorders or clarinets, with reeds for the mouthpiece like clarinets today, and by the New Kingdom there were bronze trumpets, too. The woman in the thin white dress is playing two recorders at the same time. And there were percussion instruments like drums andrattles, which is what the little kid is playing.

As the picture shows, a lot of Egyptian musicians were women (though not all of them). Music was a good opportunity for women to work at a skilled job. But just as women in the music industry do today, sometimes Egyptian women musicians had to wear thin or revealingclothes, and dance as well as singing. And some musicians were probably slaves.
Although music existed in prehistoric Egypt, the evidence for it becomes secure only in the historical (or "dynastic" or "pharaonic") period--after 3100 BCE. Music formed an important part of Egyptian life, and musicians occupied a variety of positions in Egyptian society. Music found its way into many contexts in Egypt: temples, palaces, workshops, farms, battlefields and the tomb. Music was an integral part of religious worship in ancient Egypt, so it is not surprising that there were gods specifically associated with music, such as Hathor and Bes (both were also associated with dance, fertility and childbirth).

All the major categories of musical instruments (percussion, wind, stringed) were represented in pharaonic Egypt. Percussion instruments included hand-held drums, rattles, castanets, bells, and the sistrum--a highly important rattle used in religious worship. Hand clapping too was used as a rhythmic accompaniment. Wind instruments included flutes (double and single, with reeds and without) and trumpets. Stringed instruments included harps, lyres, and lutes--plucked rather than bowed. Instruments were frequently inscribed with the name of the owner and decorated with representations of the goddess (Hathor) or god (Bes) of music. Both male and female voices were also frequently used in Egyptian music.

Professional musicians existed on a number of social levels in ancient Egypt. Perhaps the highest status belonged to temple musicians; the office of "musician" (shemayet) to a particular god or goddess was a position of high status frequently held by women. Musicians connected with the royal household were held in high esteem, as were certain gifted singers and harp players. Somewhat lower on the social scale were musicians who acted as entertainers for parties and festivals, frequently accompanied by dancers. Informal singing is suggested by scenes of workers in action; captions to many of these pictures have been interpreted as words of songs. Otherwise there is little evidence for the amateur musician in pharaonic Egypt, and it is unlikely that musical achievement was seen as a desirable goal for individuals who were not professionals.

The ancient Egyptians did not notate their music before the Graeco-Roman period, so attempts to reconstruct pharaonic music remain speculative. Representational evidence can give a general idea of the sound of Egyptian music. Ritual temple music was largely a matter of the rattling of the sistrum, accompanied by voice, sometimes with harp and/or percussion. Party/festival scenes show ensembles of instruments (lyres, lutes, double and single reed flutes, clappers, drums) and the presence (or absence) of singers in a variety of situations.
http://www.traditionalarabicmusic.com/music_of_egypt.html

Known as a nation
For mummification,
They wrote on papyrus,
And how they inspire us!

Ancient inscriptions
Dramatic depictions,
From ages before us,
Now here comes the chorus!

Who was the nicest?
Osiris or Isis?
Anubis or Horus?
Now back to the chorus!