The Heron and the Hummingbird 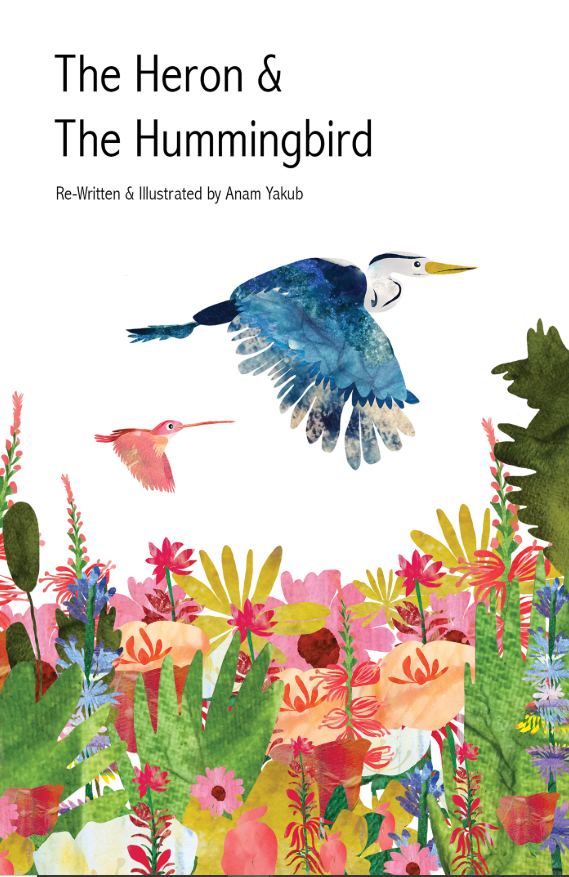 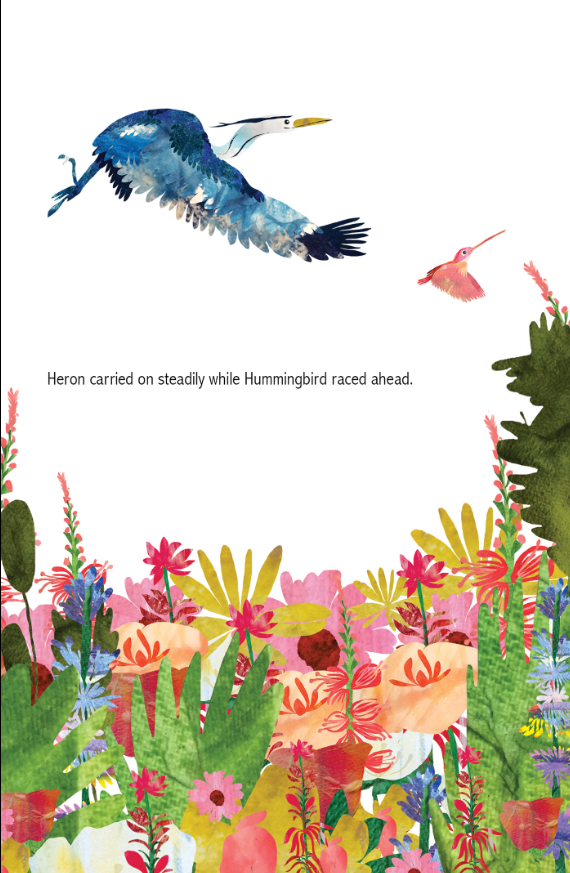 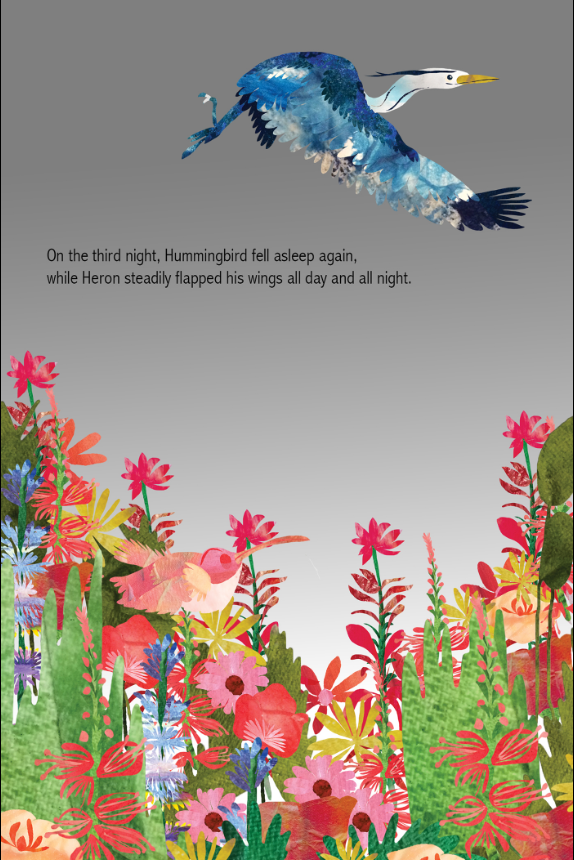 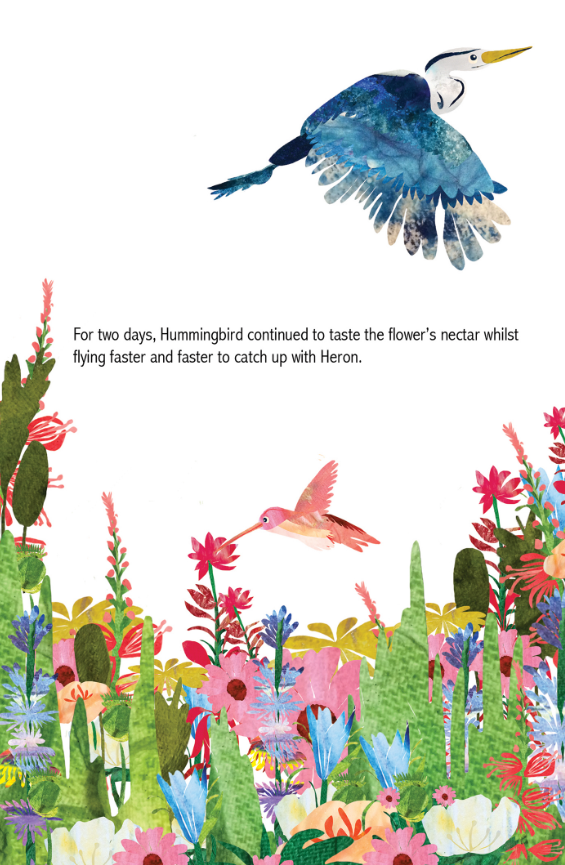 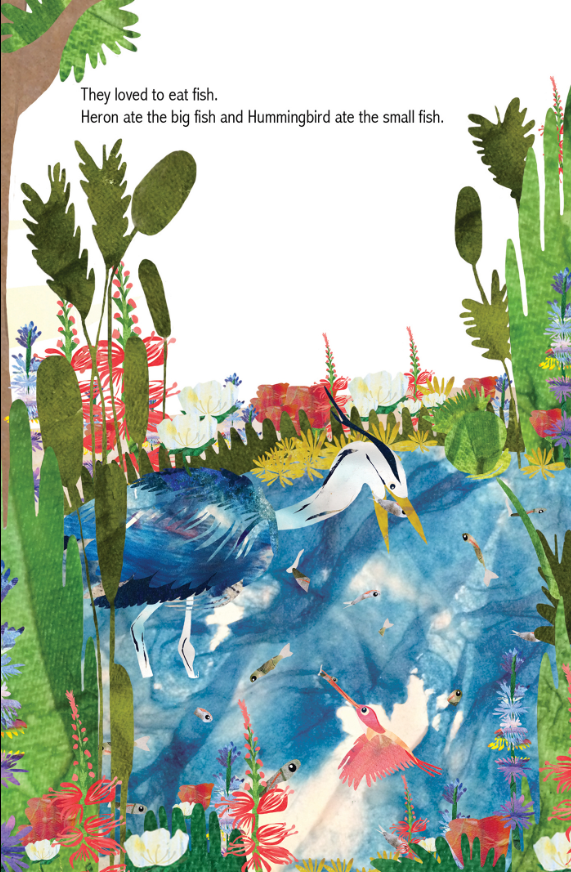 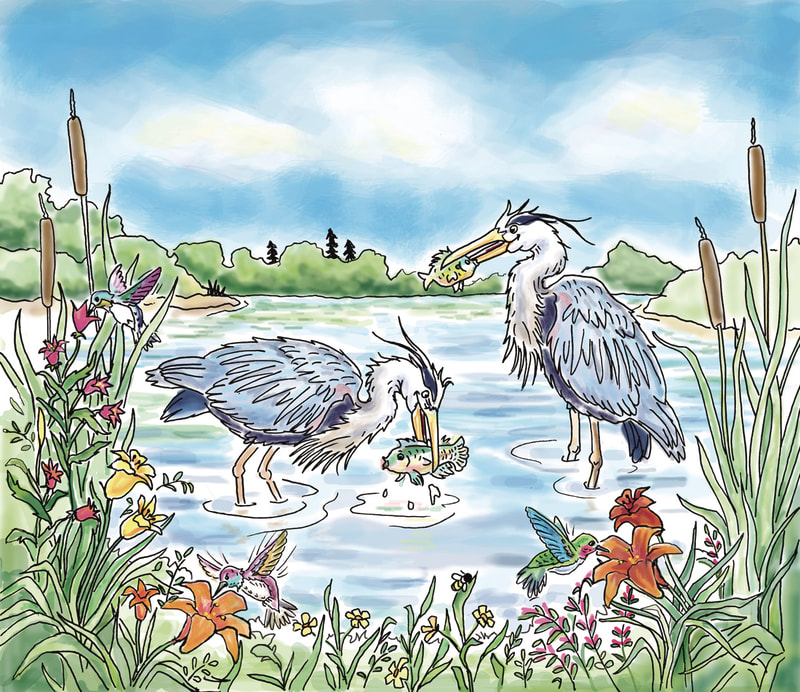 Heron and Hummingbird were very good friends, even though one was tall and gangly and awkward and one was small and sleek and fast. They both loved to eat fish. The Hummingbird preferred small fish like minnows and Heron liked the large ones.

One day, Hummingbird said to his friend: "I am not sure there are enough fish in the world for both of our kind to eat. Why don't we have a race to see which of us should own the fish?"

Heron thought that was a very good idea. They decided that they would race for four days. The finish line was an old dead tree next to a far-away river. Whichever of them sat on top of the tree first on the fourth day of the race would own all the fish in the world.

They started out the next morning. The Hummingbird zipped along, flying around and around the Heron, who was moving steadily forward, flapping his giant wings. Then Hummingbird would be distracted by the pretty flowers along the way. He would flit from one to the other, tasting the nectar. When Hummingbird noticed that Heron was ahead of him, he hurried to catch up with him, zooming ahead as fast as he could, and leaving Heron far behind. Heron just kept flying steadily forward, flapping his giant wings.

Hummingbird was tired from all his flitting. When it got dark, he decided to rest. He found a nice spot to perch and slept all night long. But Heron just kept flying steadily forward all night long, flapping his giant wings.

When Hummingbird woke in the morning, Heron was far ahead. Hummingbird had to fly as fast as he could to catch up. He zoomed past the big, awkward Heron and kept going until Heron had disappeared behind him. Then Hummingbird noticed some pretty flowers nearby. He zip-zipped over to them and tasted their nectar. He was enjoying the pretty scenery and didn't notice Heron flap-flapping passed him with his great wings.

Hummingbird finally remembered that he was racing with Heron, and flew as fast as he could to catch up with the big, awkward bird. Then he zipped along, flying around and around the Heron, who kept moving steadily forward, flapping his giant wings.

For two more days, the Hummingbird and the Heron raced toward the far-distant riverbank with the dead tree that was the finish line. Hummingbird had a marvellous time sipping nectar and flitting among the flowers and resting himself at night. Heron stoically kept up a steady flap-flap-flapping of his giant wings, propelling himself forward through the air all day and all night.

Hummingbird woke from his sleep the morning of the fourth day, refreshed and invigorated. He flew zip-zip toward the riverbank with its dead tree. When it came into view, he saw Heron perched at the top of the tree! Heron had won the race by flying straight and steady through the night while Hummingbird slept.

So from that day forward, the Heron has owned all the fish in the rivers and lakes, and the Hummingbird has sipped from the nectar of the many flowers which he enjoyed so much during the race.