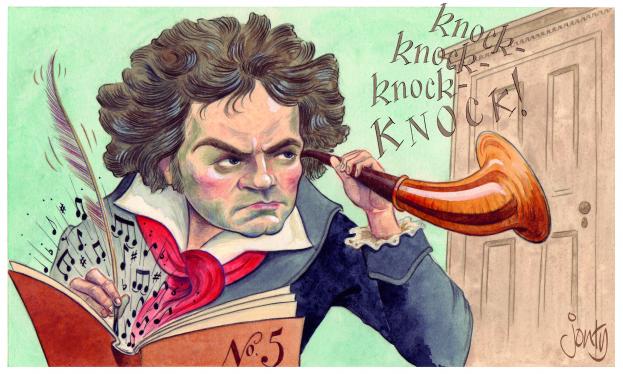 Symphony Number 5 - First Movement
Ludwig van Beethoven was a German composer and pianist. He loved going for long walks in the countryside. On one of these walks he had the musical idea for the beginning of Symphony No.5 “Da Da Da Duuuh”. It is one of the most famous motifs in musical history and has even been reused in pop songs! Incredibly, Beethoven wrote this symphony when he was beginning to lose his hearing, in his thirties. Some people think that the opening motif represents fate knocking on the door, Beethoven's fate sadly being deafness. He wrote nine symphonies. A symphony is a long piece for orchestra usually split into four sections known as movements. Listen out for the opening motif, it is repeated many times throughout the movement.
Focus of Lesson

Many composers throughout history have written symphonies – which are big pieces of music for a whole orchestra to play. Hundreds of years ago, orchestras were smaller, but as time has gone on they have grown. Some symphony orchestras contain more than 100 players. Imagine having a football team with that many players!

In his lifetime, Beethoven wrote nine symphonies, and this piece of music is taken from his fifth symphony. He started to write this symphony in 1804, and it took him four years to write. It is normal for symphonies to have three or four (or more) different movements – like chapters in a book, or episodes in a television series. This is the first movement, out of four movements, and is one of the most famous pieces of music in the world.

Listen to the opening four notes of the piece. This is called a motif (moe-teef), which is a musical term meaning a repeated group of notes. This technique is used a lot in symphonic writing, but this is probably one of the most famous motifs. The motif is heard, on different groups of instruments and using different notes, throughout the first movement, and throughout the entire symphony. It is used as a way of tying the four movements together, making them feel like they all belong.

Listen to the audio track and raise your hands when you think you can hear the four- note motif being played.

Rhythm is very important in this symphony. The notes of the motif change each time you hear it, but the rhythm stays the same. What is rhythm? Are the four notes long notes or short notes, or a mixture of both?

The rhythm is made up of three short notes followed by one long note. This is the rhythm that is repeated again and again. Can you clap the rhythm? Listen to the track again, can you hear these short and long notes?

Create a rhythmic motif of no more than six notes. Try this individually then in pairs, and start by simply clapping, tapping or clicking the rhythm, or use an untuned percussion instrument. The rhythm should consist of a mixture of long and short notes. A simple rhythm is often the most memorable. Perform these rhythms to the rest of the class. Can you identify how many long notes and how many short notes make up each motif?
Motif Extension:
To expand the compositional aspect of this activity, try to create a melody for your motif. This can be very simple (remember that Beethoven’s motif only contains two different notes). Can you identify ways in which your motif can be developed, through using different notes, different speeds, and different instruments? Experimentation is the key here!
Notation for Beginners:
Notation for Grades 1 & 2:

Many people recognise Beethoven’s Symphony No.5 as soon as they hear the first four-note motif, ‘da-da-da-DUM’:

Throughout the first movement of Beethoven’s symphony, we hear these four notes, or variations of them, time and time again. They are recycled throughout the orchestra; every instrument plays them at some point. These four notes are the foundation on which the rest of the piece is based. You can create your own piece of music based on this famous motif by using the same composition techniques that Beethoven used.
Opening Structure

Below is the rhythmic structure of the opening of the symphony, dissected into three different parts. We will orchestrate this as a class using a variety of tuned and untuned classroom instruments or body percussion. For example, keyboards could play part 1, part 2 by guitars and part 3 by violins. We're not going to worry about correct pitch at this stage, it is more important to experience throwing the motif between sections.

The opening motif is 3 quavers followed by a paused minim, which in very simple terms, are three notes of equal length followed by one longer note. Can you create your own 4-note rhythm? For example, 2 short and 2 long or 1 long and 3 short and so on.

We will then choose three different variations and give one to each instrument. Let's try layering them on top of one another and see what rhythmic groove we can create, for example:

For the initial motif, Beethoven uses the notes G-G-G-E flat / F-F-F-D. The entire orchestra plays them together in unison. The interval between a G and E flat is called a ‘major third’, which suggests a happy piece is about to follow. However, as the piece progresses the rhythm of the motif is thrown around different parts and constantly recycled (as shown in the opening structure), but not always using the same notes and it is these different pitches that help give the movement its angry and stormy feel. Try experimenting by applying different pitches to your newly composed rhythms to see how they affect the mood. Here’s an example of how the opening could be changed: 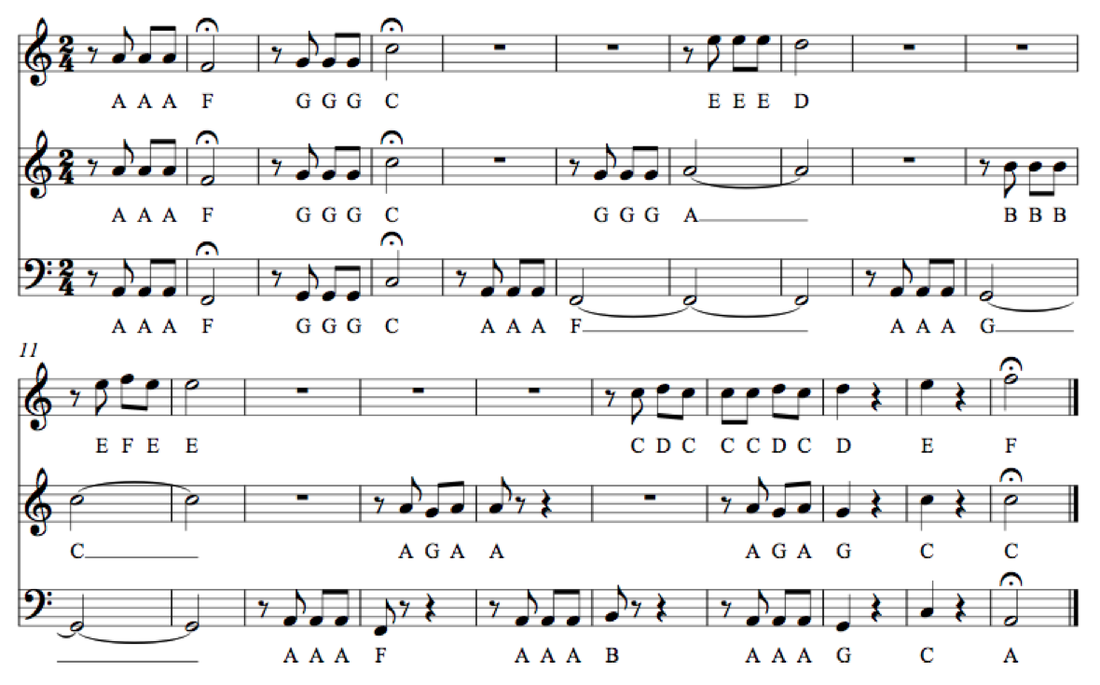 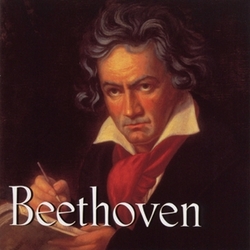